Computed tomography perfusion (CTP) has gained significant relevance for the radiological screening of patients at risk of developing delayed cerebral ischemia (DCI) after aneurysmal subarachnoid hemorrhage (aSAH). Particularly, the impact of MTTPEAK, i.e., the maximal mean transit time value in a series of CTP measurements, for the prediction of long-term outcome has recently been demonstrated by our group. Complementing this recent work, the present study investigated how the timing of MTTPEAK affected the long-term outcome after aneurysmal subarachnoid hemorrhage.

CTP examinations from 103 patients with clinical deterioration attributed to DCI after aSAH were retrospectively analyzed for time interval between SAH ictus and onset of MTTPEAK in association with modified Rankin Scale (mRS) 23.1 months after SAH.

The current findings suggest a presumably higher vulnerability of the brain to early microcirculatory impairments after aSAH and highlight that timing of MTT elevations could be considered for the identification of patients at increased risk for poor neurological outcome due to DCI. 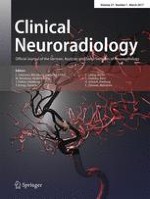 Process of the Functional Reorganization of the Cortical Centers for Movement in GBM Patients: fMRI Study

Hemispheric Differences in Leukoaraiosis in Patients with Carotid Artery Stenosis: A Systematic Review