Interventional case series of 16 patients. Mitomycin was a primary treatment for residual epithelial disease in ten patients (eight with PAM with atypia and two with conjunctival melanoma) and as an adjuvant to excision and cryotherapy in six with conjunctival malignant melanoma. Primary treatments consisted of mitomycin 0.04% qid for 28 days (two 14-day cycles) and for 7 consecutive days as adjuvant therapy. Patients were followed for both local recurrence and metastatic disease. 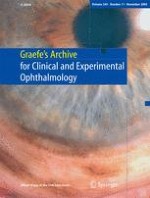