No difference between both hands was observed for clinical and radiographical presentations in EHOA patients.
A bilateral and symmetrical relationship was found between hand joints.

EHOA have symmetrical distribution and specific association in structural lesions.

This study aims to analyse the preferential topographical distribution of clinical and structural lesions between the dominant and non-dominant hands in erosive hand osteoarthritis (EHOA) patients. Both hands were assessed via radiography in EHOA patients. A comparative analysis of the clinical features and structural lesions between the dominant and non-dominant hands was performed. The structural lesions were assessed according to the anatomical radiographic score of Verbruggen-Veys (VV). Next, a principal component analysis was performed to describe and highlight the relationships observed between the joints. Sixty patients were included in this study: there were 57 women, and the mean age was 66.1 (± 7.6) years. For the distal interphalangeal (DIP) joints, nodes were observed more frequently on the dominant hand (4 vs 3; p = 0.005). No difference in structural lesions was observed between the two hands except for the 2nd proximal interphalangeal (PIP) (p = 0.045). A principal component analysis with varimax rotation described relationships between the 2nd PIP, 3rd PIP, 4th PIP, 4th DIP and 5th DIP joints in both hands. No significant differences between dominant and non-dominant hands were observed for clinical and structural lesions in our sample of EHOA patients. A bilateral and symmetrical injury was observed in most EHOA joints.
Trial registration Clinical trial registration number: NCT01068405.
Anzeige 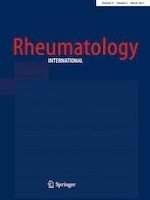 The effect of a nurse-led prednisolone tapering regimen in polymyalgia rheumatica: a retrospective cohort study

Perceived clinical utility of a test for predicting inadequate response to TNF inhibitor therapies in rheumatoid arthritis: results from a decision impact study

The structural, functional and electrophysiological assessment of paraspinal musculature of patients with ankylosing spondylitis and non-radiographic axial spondyloarthropathy