As a person ages, total body water (TBW), intracellular water (ICW), muscle mass and muscle strength tend to decline. The decline in ICW may reflect losses in the number of muscle cells but may also be responsible for less hydrated muscle cells.

To assess whether TBW and ICW are associated with muscle strength, functional performance and frailty in an aged population, independently of muscle mass.

A total of 324 subjects were recruited (mean age 80.1 years, 47.5% women). TBW and ICW were closely correlated with muscle mass in both sexes. ICW was also associated with Barthel score, gait speed and frailty in both sexes and with handgrip in men. Considerable variability in ICW was observed for the same muscle mass. Multivariate analysis showed a positive effect of ICW on handgrip, functional performance and gait speed and a protective effect of ICW on frailty, independently of age, sex, body mass index and number of comorbidities.

In elderly individuals with similar muscle mass, those with higher ICW had a better functional performance and a lower frailty risk, suggesting a protective effect of cell hydration, independently of muscle mass. 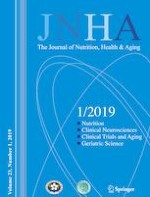 Association of BNP with Frailty in Elderly Population: Rugao Longevity and Ageing Study