Retrospective analysis of prospective database on operative and postoperative characteristics and surgical outcomes of patients in whom the intention was to remove tumors located in s7 of the liver laparoscopically. We defined two groups: those with laparoscopic metastasectomy of s7 (s7 group) and those undergoing laparoscopic right posterior sectionectomy (RPS group).

Although resection of lesions in s7 is technically demanding, a laparoscopic approach can be performed safely and effectively in experienced hands. 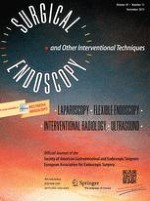 Serum value of procalcitonin as a marker of intestinal damages: type, extension, and prognosis