Psychosocial Interventions (PIs) have shown positive effects on clinical and functional outcomes of schizophrenia (SZ) in randomized controlled trials. However their effectiveness and accessibility remain unclear to date in “real world” schizophrenia. The objectives of the present study were (i) to assess the proportion of SZ outpatients who benefited from PIs between 2010 and 2015 in France after an Expert Center Intervention in a national multicentric non-selected community-dwelling sample; (ii) to assess PIs’ effectiveness at 1-year follow-up. 183 SZ outpatients were recruited from FondaMental Advanced Centers of Expertise for Schizophrenia cohort. Baseline and 1-year evaluations included sociodemographic data, current treatments, illness characteristics and standardized scales for clinical severity, adherence to treatment, quality of life, a large cognitive battery, and daily functioning assessment. Only 7 (3.8%) received a PI before the evaluation, and 64 (35%) have received at least one PI during the 1-year follow-up. Having had at least one PI during the follow-up has been associated in multivariate analyses with significantly higher improvement in positive and negative symptoms (respectively p =0.031; p = 0.011), mental flexibility (TMT B, p = 0.029; C-VF, p = 0.02) and global functioning (p =0.042). CBT and SST were associated with higher cognitive improvements, while CRT was associated with clinical improvement. These results have not been demonstrated before and suggest that the effect of each PI is larger than its initial target. The present study has confirmed the PIs’ effectiveness in a large sample of community-dwelling SZ outpatients at 1 year follow-up. Efforts to improve access to PI should be reinforced in public health policies. 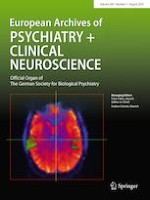 12-year changes in cardiovascular risk factors in people with major depressive or bipolar disorder: a prospective cohort analysis in Germany