Tracheobronchopathia Osteochondroplastica: a rare case report of a non-smoker and non-atopic patient, with a long history of wheezing since childhood | springermedizin.de Skip to main content
TOOLBAR 1 2 3 4
SUCHE MENÜ 1 2 3 4

AGF, AA, and PP contributed to draft the study, write the manuscript and revise editing. AA, SC and GD contributed to the acquisition of patient data and figures. AGF, LS and RT performed fibrobroncoscopy and bronchial biopsies, and participated in the patient follow up. VM carried out the histological analysis, achieved the histological figures, discussed the patient biopsies and the histological aspect of TBPO. All authors gave a substantial contribution in the draft of this manuscript, in the acquisition of data and/or in the data interpretation, in the literature search and discussion, and in revising it critically. The final version of the manuscript was read and approved by all the authors.

Tracheobronchopathia Osteochondroplastica (TBPO) is an uncommon and benign condition characterized by osseous or metaplastic cartilaginous 1–3 mm nodules in the submucosa of the tracheo-bronchial tree. Posterior membranous wall of trachea is typically spared. Ecchondrosis and exostosis nodules can cause chronic inflammation and mucosal metaplasia, stiffness and airway obstruction. The prevalence of this disease, often asymptomatic or associated with nonspecific symptoms, is underestimated, and the mean age at diagnosis is 50 years.

We report a case of a 49 year old male, non-smoker. He was a smith, homeless, born in Romania and reported a diagnosis of asthma since childhood. He was admitted to our Respiratory Unit presenting low-grade fever with profuse sweating, cough, purulent sputum, and ground-glass opacity with irregularity in main bronchi detected by High-Resolution Computed Tomography (HRCT) scan.
Fibrobronchoscopy revealed the presence of mucosal irregularities up to the segmental bronchi entrance. Histological examination showed nodules of osseouscartilaginous nature, consistent with TBPO. Microbiological tests of Bronchoalveolar Lavage fluid also revealed an infection by Pseudomonas Aeruginosa. 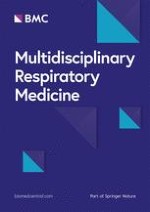 Cough: impact, beliefs, and expectations from a national survey