Bone mass in childhood is highly influenced by puberty. At the same age, bone mass was higher for pubertal than pre-pubertal children. A high level of tracking during 7 years from childhood through puberty was shown, indicating that early levels of bone mass may be important for later bone health.

Bone mass in pubertal children is higher than that of pre-pubertal children at the same age. Analysing tracking with quintiles of bone mass Z-scores in 2008 and 2015 showed that more than 80% of participants remained in the same or neighbouring quintile over the study period. Tracking was confirmed by correlation coefficients between Z-scores at baseline and 7-year follow-up (range, 0.80–0.84).

Bone mass is highly influenced by pubertal onset, and pubertal stage should be considered when examining children’s bone health. Because bone mass indices track from childhood into puberty, children with low bone mass may be at risk of developing osteoporosis later in life. 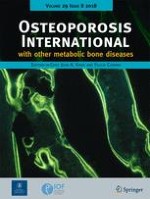 At what price decreased mortality risk?

Biomarkers of muscle damage increased in anterolateral compared to direct lateral approach to the hip in hemiarthroplasty: no correlation with clinical outcome

Reply to “At what price decreased mortality risk?”

Impact of muscle atrophy on bone metabolism and bone strength: implications for muscle-bone crosstalk with aging and disuse

Sleep duration and the risk of osteoporosis among middle-aged and elderly adults: a dose-response meta-analysis