Recurrence of tuberculosis (TB) is still a key issue in the control of tuberculosis. The presence of nontuberculous mycobacteria (NTM) complicates the diagnosis of recurrent TB due to similarity in clinical presentation. Herein, we have used molecular genotyping methods to identify mycobacteria species, and analyzed the characteristics of patients with transition between MTB and NTM. Eighty-nine patients with recurrent tuberculosis over the past 12 years were included in our analysis. We found that 9 patients had NTM infections during the study period. Six patients were infected with different mycobacterial strains, half of which were transformed from NTM to MTB, and the other half from MTB to NTM. In addition, the other 3 patients were infected with the same NTM species. Further WGS analysis showed that only one patient had a relapse and the remaining two were classified as reinfection. In conclusion, our results demonstrate that a proportion of previously diagnosed recurrent TB cases are attributed to the transition between MTB and NTM, highlighting the significance of species identification prior to initiation of treatment. The recurrence of mycobacterial diseases is majorly noted within 1 year after treatment completion.
Anzeige 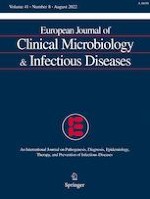 Fusidic acid in a tertiary hospital: an observational study focusing on prescriptions, tolerance and susceptibility of Staphylococcus and Cutibacterium spp. strains from bone samples