main-content
nach oben
Zurück zum Suchergebnis
​
print
Inhaltsverzeichnis
​
insite
Ausgabenarchiv
​
archive
​
insite
Drucken
​
print
» Jetzt Zugang zum Volltext erhalten
Wichtige Hinweise
Each author certifies that he has no commercial associations (e.g., consultancies, stock ownership, equity interest, patent/licensing arrangements, etc.) that might pose a conflict of interest in connection with the submitted article.
Each author certifies that his or her institution has approved or waived approval for the human protocol for this investigation and that all investigations were conducted in conformity with ethical principles of research.

When osteonecrosis is located in the mid- to posterior region, we generally perform a transtrochanteric posterior rotational osteotomy. We retrospectively reviewed the clinical and radiographic results in 47 consecutive patients (51 hips) in whom we performed posterior rotational osteotomies. The average age was 37 years at the time of surgery. There were 30 male and 17 female patients. Thirty-six hips were ARCO Stage III, and 15 were Stage IV. Conversion to THA was defined as the failure end point. Three patients died and one was lost to followup. We were therefore able to follow 43 patients (46 of the 51 hips, or 90%) a minimum of 1.2 years (average, 12 years; range, 1.2–21 years). We used the Harris hip score for preoperative and most recent followup. The average preoperative Harris hip score of 52 points improved to an average of 84 at the latest followup. Radiographically, the osteonecrosis in 30 hips (65%) had no progressive collapse, and 13 (28%) showed osteoarthritic changes, but no patients underwent THA. A posterior rotational osteotomy appears useful for patients with extensive necrosis and advanced collapse.
Level of Evidence: Level IV, therapeutic study. See Guidelines for Authors for a complete description of levels of evidence. 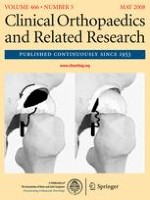 50 Years Ago in CORR

50 Years Ago in CORR: Lumbosacral Fusion: The Mortised Transfacet Method by Use of the Vibrating Electric Saw for Circular Bone Blocks Earl D. McBride MD, Howard B. Shorbe MD CORR 1958;12:268–275