The purpose of this report is twofold: first, to detail our operative approach to rectocele repair, and second, to report on the outcomes.

Transverse incision transvaginal rectocele repair combined with levatorplasty and biological graft placement is detailed using hand-drawn sketches and intraoperative photographs. All patients with symptoms of functional constipation and non-emptying rectocele operated on from May 2007 to March 2013 at our institution were enrolled in this study. Data from a prospectively maintained database were retrospectively analyzed. Preoperative and postoperative functional outcomes were studied using a validated 31-point obstructed defecation (OD) scoring system. Follow-up was 1 year.

Twenty-three patients underwent the procedure. The mean age of patients was 55 years (range 28–79 years). The OD severity score improved from the preoperative mean of 21.6 to postoperative mean of 5.5 (p = 0.001). Three out of four patients with initial symptoms of dyspareunia (75 %) reported significant improvement in dyspareunia, while 2 out of 19 patients without initial symptoms of dyspareunia (11 %) reported mild dyspareunia following the repair. One patient (4 %) required operative drainage of a hematoma. Another patient (4 %) developed symptomatic recurrence which was confirmed radiologically.

In properly selected patients, the technique described leads to significant improvement in symptoms of OD and low recurrence without an increased rate of dyspareunia. 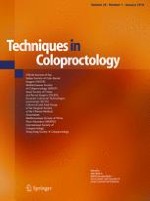