Five—two male and three female—patients from 37 to 68 years presented with RM following 106Ru-plaque brachytherapy or stereotactic radiation therapy (STx) with photons using a hypofractionated schedule of 5 × 10 Gy. All were treated with triamcinolone injections in first line and proofed to be refractory to steroids. In addition, two patients had received Ozurdex® implants as a second-line treatment, though without any clinical benefit. FAc slow-release implants were injected, and patients were followed up to monitor clinical improvement.

All patients responded to therapy by means of a decrease in macular oedema. In four of five (80%) patients, visual acuity improved, and one patient showed stable visual acuity. No toxic effects or complications were observed. 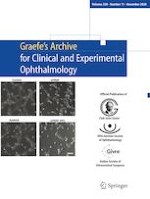 Proptosis due to intraorbital space-occupying lesions in children