Severe hypertriglyceridemia (SHTG) is well known to be associated with severe diseases such as acute pancreatitis and cardiovascular disease.
Concerning the role of triglycerides (TG) in promoting cardiovascular disease, there are still controversial discussions more than 60 years after Moreton first postulated a relationship between them [ 1]. However, recent data on SHTG are likely to settle this debate by establishing a consistent strong relation of TG levels (especially nonfasting TG levels) with cardiovascular risk [ 2– 5].
Anzeige
The role of SHTG in causing acute pancreatitis, however, is commonly accepted. According to the literature, SHTG is the most common cause for acute pancreatitis after gallstones and alcohol [ 6, 7]. SHTG is reported to account for up to 10% of all acute pancreatitis episodes [ 8]. Some studies on gestational pancreatitis even report SHTG as the underlying etiology in more than half of all cases [ 9]. There is even some evidence that hypertriglyceridemic pancreatitis is associated with a higher severity and a higher complication rate [ 10, 11].
Since the association of SHTG and pancreatitis was first postulated by Speck [ 12] in 1865, the topic has attracted many research efforts. Several mechanisms for the disease have been proposed, including the hydrolysis of TGs forming free fatty acids inducing inflammation, chylomicrons inducing hyperviscosity leading to ischemia, and, finally, genetic predisposition [ 13, 14]. In addition, cytokines seem to play a major role in acute pancreatitis including the systemic responses [ 15], yet the exact pathophysiology still remains unclear and is still controversially discussed.
It is generally believed that TG levels of > 1,000 mg/dL (11.3 mmol/L) trigger acute pancreatitis and its serious complications. This threshold, however, is arbitrary and the level above which acute pancreatitis might occur is actually unknown. Therefore, rapid lowering of excessively elevated serum TG levels is a primary medical goal in preventing serious harm to the patient suffering from SHTG.
The general treatment regimen for SHTG includes dietary restrictions and lipid-lowering drug treatment such as the use of medium-chain triglycerides (MCT), fibrates, omega-3-fatty acids (omega-3-FA), and nicotinic acid. Yet, drugs of first choice, such as fibrates, do not offer fast onset of action, while immediately acting drugs like omega-3-FA and MCT may not be powerful enough to lower excessively elevated TG levels rapidly. Since patients with excessively elevated TG levels are in urgent need of a fast and effective lowering of their TG levels in order to prevent a severe pancreatitis episode, further measures must be taken. Immediate apheretic treatment might thus be an interesting option in order to rapidly lower excessively elevated TG levels and prevent or attenuate acute pancreatitis in these patients. Recently, the successful use of plasmapheresis for treating patients with SHTG has not only been confirmed in a number of studies, but has also been suggested by the American Society for Apheresis (ASFA) Committee on Clinical Applications.
Anzeige

The causes of hypertriglyceridemia may be categorized into genetically based disorders (primary disorders) and secondary disorders due to other diseases. Till date, the only genetically well characterized kinds of SHTG are lipoprotein lipase (LPL) deficiency and apolipoprotein (Apo) C-II deficiency, which usually present in infancy as chylomicronemia syndromes causing SHTG at a very early childhood age. In adults, SHTG usually presents with very high fasting levels of chylomicrons, VLDL, and remnants [ 16]. This condition is probably of plurigenetic origin with a strong environmental and lifestyle impact on its manifestation. Occasionally, a patient with ApoE2/E2 homozygosis (dysbetalipoproteinemia, type III hyperlipoproteinemia) will develop SHTG.
There is a large number of secondary causes of SHTG. Among these, obesity, untreated diabetes mellitus, alcohol, pregnancy, and different drugs are probably the most common. Several of the secondary causes are associated with abnormalities of insulin responsiveness.

Lifestyle changes and dietary modifications are essential features in the management of SHTG. Avoidance of alcohol, weight reduction, exercise, and control of (potential) concomitant endocrinopathy (e.g., diabetes mellitus and hypothyroidism) are imperative measures in the management of SHTG. Drugs with untoward effects must be avoided. Dietary advice by a nutritionist is obligatory.
A study of 32 patients with SHTG by Hauenschild et al. [ 17] highlights the positive effect of self-monitoring of lipid levels by patients at home. Patients were able to influence their diet individually to stabilize their TG levels and to avoid episodes of SHTG.

Insulin treatment is often considered helpful in lowering SHTG, because insulin activates LPL leading to an acceleration of chylomicron degradation. As SHTG often presents in poorly controlled diabetic patients, aggressive insulin treatment is especially helpful in those patients for the management of hyperglycemia as well as for activation of LPL. However, as many studies demonstrated, its use is not limited to diabetic patients [ 18– 22]. Heparin, another agent often referred to, stimulates the release of endothelial LPL into the circulation [ 21, 22]. Yet, heparin treatment in SHTG is subject to greater controversy due to the only transient rise in LPL followed by increased degradation and depletion of plasma stores resulting in LPL deficiency [ 23– 25].
Anzeige

Another treatment modality potentially useful for cases of SHTG with documented LPL deficiencies is described by Stroes et al. [ 26]. This treatment consists of local intramuscular application of a viral vector containing a LPL gene. This gene therapy enables the LPL-deficient patient to cope with postprandial chylomicronemia. Together with the other measures described above, LPL gene therapy may become a useful tool for achieving permanent control of SHTG in the future.

Apheresis for lowering TG levels was first reported in 1978 by Betteridge et al. [ 27] and plasmapheresis has since been a therapeutic tool for SHTG. Till date, several small studies [ 28– 36] and case reports (overview by Iskandar and Olive [ 37]) on the use of apheresis in SHTG have been published. An overview of the currently available studies (more than ten patients) is given in Table  2. They all demonstrate effectiveness of the apheretic treatment by showing a rapid decrease in TG levels over a short period of time.
Table 2
Overview of the currently available studies (more than 10 patients) on the use of apheresis in SHTG
FFP fresh-frozen plasma; n.a. not available
The beneficial effect of plasmapheresis is believed to be due to a rapid decrease in TG levels, yet removal of excessive proteases from the plasma and replacement of consumed protease-inhibitors might play an additionally beneficial role.
A multicenter study by Stefanutti et al. [ 28] included 17 patients with SHTG who had not responded to conventional medical therapy (fat-free diet plus pharmaceutical interventions). After treatment, the mean plasma TG and total cholesterol concentrations were significantly reduced from 1,929 and 510 to 762 and 227 mg/dL, respectively. The removal of TG-rich lipoproteins by therapeutic plasma exchange (TPE) prevented relapses of acute pancreatitis episodes. TPE was confirmed as a safe and reliable method.
Anzeige
According to the data of Lennertz et al. [ 29] and Yeh et al. [ 30, 31], a single session of plasmapheresis proofs capable of dramatically lowering TG levels by up to 70% producing clear clinical and laboratory improvement of acute pancreatitis.
As many studies suggest, the timing of the apheretic treatment might be crucial [ 29, 32, 33]. There are several reports showing that maximal reduction in morbidity and mortality can be achieved when apheresis is used as early as possible [ 38, 39]. Lennertz et al. [ 29] performed a retrospective analysis of five cases treated by TPE immediately after diagnosis. A TG reduction by 65–70% was observed. All patients were discharged in a good condition. Among the subjects was a pregnant patient with SHTG-induced pancreatitis, who gave birth to a healthy child later on.
A study by Kyriakidis et al. [ 35] included ten patients with pancreatitis due to SHTG, who underwent plasmapheresis within 48 h of diagnosis. They all showed a significant improvement in their general condition and a regression of pain, only one patient died in this study.
Chen et al. [ 32] compared two groups of patients before and after the availability of apheresis in a larger retrospective study. No benefit concerning the rate of overall mortality and complications could be detected. However, as concluded by the authors, the timing of apheresis might exactly be the critical point in this study.
Anzeige
Technical details concerning apheretic treatment are also increasingly under investigation. Till date, there are two small studies comparing plasmapheresis with double membrane filtration in patients with SHTG [ 31, 40]. Both studies were able to show a significant reduction in TG levels. Plasma exchange therapy seemed slightly more efficient than double membrane filtration (removal rate 64.1 vs. 57.5%) [ 40].

Plasmapheresis appears to be a safe and useful therapeutic tool in patients suffering from SHTG. Apheretic treatment is able to remove the causative agent for continuing damage to the pancreas by rapidly lowering excessively elevated TG levels. Data suggests that the use of apheresis in patients with SHTG should be performed as early as possible in order to achieve best results.
Plasmapheresis, however, is a rather expensive treatment option and not available in all centers. This might therefore limit its use.
Apheretic treatment is indicated in medical emergencies such as hypertriglyceridemic pancreatitis if TG levels are excessively elevated (TG > 1,000 mg/dL). Apheretic treatment should be performed until TG levels have been lowered to < 500 mg/dL. Following apheretic treatment, we recommend a 1–2 weeks of nutritional intervention with an MCT and omega-3-FA-rich diet according to the data presented by Hauenschild et al. [ 41]. A rigorous pharmacological treatment, dietary advice by a nutritionist and lifestyle changes are imperative. Suggestions for an efficient treatment regime of these patients are presented in Table  3.
Table 3
Suggested treatment regime for SHGT
Note carefully that conventional treatment of any comorbidity, e.g., pancreatitis is imperative as well as screening for secondary causes of HTG and treatment of the underlying disease
SHTG severe hypertriglyceridemia; TG triglycerdies; FA fatty acids; MCT medium-chain triglycerides; LC-FA long-chain fatty acids; EPA eicosapentaenoic acid; DHA docosahexaenoic acid
Acknowledgment
This article is part of a supplement sponsored by an unrestricted educational grant from B. Braun and Fresenius Medical Care.

The authors declare that they have no conflict of interest.
Open AccessThis article is distributed under the terms of the Creative Commons Attribution 2.0 International License ( https://​creativecommons.​org/​licenses/​by/​2.​0), which permits unrestricted use, distribution, and reproduction in any medium, provided the original work is properly cited. 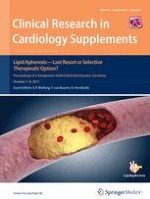 HELP apheresis in hypercholesterolemia and cardiovascular disease: efficacy and adverse events after 8,500 procedures

Pharmacogenetic aspects in familial hypercholesterolemia with the special focus on FHMarburg (FH p.W556R)