There is a paucity of epidemiological information on treatment and imaging of pituitary adenomas in Australia.

Australian data on pituitary surgery, hospital admissions for pituitary adenomas, and pituitary imaging on patients 15 years and over were obtained from administrative databases between 2000/2001 and 2014/2015. Changes over time and by age and sex were assessed. 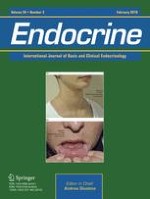 Raising awareness on the therapeutic role of cholecalciferol in CKD: a multidisciplinary-based opinion

Is levothyroxine requirement the same for tablet and soft gel formulations?