Trends in the geographic distribution of nursing staff before and after the Great East Japan Earthquake: a longitudinal study | springermedizin.de Skip to main content
TOOLBAR 1 2 3 4
SUCHE MENÜ 1 2 3 4

Medical care systems in Iwate, Miyagi and Fukushima prefectures were greatly damaged by the Great East Japan Earthquake (GEJE), which struck on 11 March 2011. The shortage of nurses in this area was concerning; however, temporal trends have not been investigated. This study aimed to investigate the trends in the geographic distribution of total nursing staff per population in the secondary medical areas (SMAs) of these prefectures before and after the GEJE. We also aimed to qualify the above trends.

We conducted a longitudinal study at four time points (July 2007, 2010, 2011 and 2013) over 6 years using reports of basic hospitalization charges from all hospitals within Iwate, Miyagi and Fukushima prefectures that experienced severe damage from the GEJE. We calculated the number of total nursing staff per population in the SMAs and compiled descriptive statistics. Changes from 2010 to 2013 were qualified and mapped. 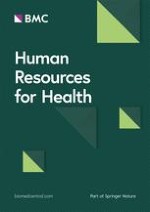 Allied health growth: what we do not measure we cannot manage

Should I stay or should I go? Exploring the job preferences of allied health professionals working with people with disability in rural Australia