Although the predictive and prognostic value of thymidylate synthase (TS) expression and gene polymorphism in colon cancer has been widely studied, the results are inconclusive probably because of methodological differences. With this study, we aimed to elucidate the role of TS gene polymorphisms genotyping in therapy response in stage III colon carcinoma patients treated with 5-FU adjuvant chemotherapy.

251 patients diagnosed with stage III colon carcinoma treated with surgery followed by 5-FU based adjuvant therapy were selected. The variable number of tandem repeats (VNTR) and the single nucleotide polymorphism (SNP) in the 5′untranslated region of the TS gene were genotyped.

There was a positive association between tumor T stage and the VNTR genotypes (p = 0.05). In both univariate and multivariate survival analysis no effects of the studied polymorphisms on survival were found. However, there was an association between both polymorphisms and age. Among patients younger than 60 years, the patients homozygous for 2R seemed to have a better overall survival, whereas among the patients older than 67 this longer survival was seen by the carriers of other genotypes.

We conclude that the TS VNTR and SNP do not predict response to 5-FU therapy in patients with stage III colon carcinoma. However, age appears to modify the effects of TS polymorphisms on survival. 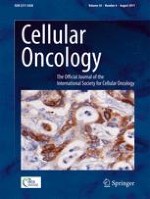 Nuclear localization of the mitochondrial ncRNAs in normal and cancer cells