To view enhanced digital features for this article go to https://​doi.​org/​10.​6084/​m9.​figshare.​6552746.
For centers participating in the ITQ Turkey Study Group and their location, see Table 1. For types of insulin used in Turkey, see Table 12).

Over 7 million people in Turkey have diabetes. Of the 1 million who inject insulin little is known of their habits and injection techniques.

We conducted an Injection Technique Questionnaire (ITQ) survey throughout Turkey that involved 1376 patients from 56 centers. Turkish values were compared with those from 41 other countries participating in the ITQ, known here as Rest of World (ROW).

The majority (50.4%) of Turkish insulin users give four injections/ day as opposed to ROW, where only 30.9% do. The abdomen is the most common injection site used by Turkish patients, but they also inject insulin in multiple body sites more often than do patients in ROW. Body mass index values in Turkey were 0.75 units higher than those in ROW as was the mean total daily dose (average daily dose [ADD]) of insulin (54.0 IU in Turkey vs. 47.4 IU in ROW). Mean glycated hemoglobin (HbA1c) in Turkey was 9.1%, which is higher than in ROW and possibly related to the higher BMI and ADD. Turkish patients use insulin analogs (short and long-acting) more frequently than do patients in ROW. The shortest pen needles (4 mm) are used by about one-third of patients in Turkey, but the longer ones (8 mm) are equally common. Needles are reused in Turkey at a rate of 3.4 injections/single needle. However, needle reuse, whether with pens or syringes, is lower in Turkey than ROW, as is the number of times a reused needle is used. More than 75% of used sharps in Turkey go into the rubbish, with nearly 6% having no protection of the tip.

The continued use of 8-mm needles raises the risk of intramuscular injections in Turkish patients. Despite full reimbursement, needle reuse still remains an important issue. More focus needs to be given to dwell times under the skin, reconstitution of cloudy insulant, correct use of skin folds and safe disposal of sharps. 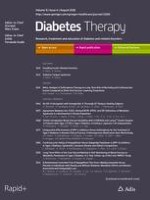 Long-Term Effect of the Color Record Method in Self-Monitoring of Blood Glucose on Metabolic Parameters in Type 2 Diabetes: A 2-Year Follow-up of the Color IMPACT Study

Switching From Pre-mixed Insulin to Regimens with Insulin Glargine in Type 2 Diabetes: A Prospective, Observational Study of Data From Adriatic Countries

Contribution of BHG and PPHG to Overall Hyperglycemia in T2DM Patients Treated with LM25 and LM50: Post Hoc Analysis of a Randomized Crossover Trial