Twitter social media is being used to disseminate medical meeting information. Meeting attendees and other interested parties have the ability to follow and participate in conversations related to meeting content. We analyzed Twitter activity generated from the 2013–2016 American Society of Breast Surgeons Annual Meetings.

The Symplur Signals database was used to determine number of tweets, tweets per user, and impressions for each meeting. The number of unique physicians, patients/caregivers/advocates, and industry participants was determined. Physician tweeters were cross-referenced with membership and attendance rosters. Tweet transcripts were analyzed for content and tweets were categorized as either scientific, social, administrative, industry promotion, or irrelevant.

Twitter social media use at the American Society of Breast Surgeons annual meeting showed a substantial increase during the time period evaluated. The use of Twitter during professional meetings is a tremendous opportunity to share information. The authors feel that medical conference organizers should encourage Twitter participation and should be educating attendees on the proper use of Twitter. 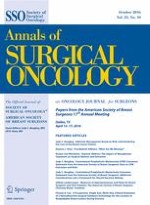 Editorial: Management Based on Risk: Individualizing the Care of the Breast Cancer Patient