The aim of the study was to analyze clinical, morphological and structural predictors of the outcome of open and endovascular surgery on non-ruptured (nr) and ruptured (r) abdominal aortic aneurysms (AAA) in a quality assurance registry of the German Vascular Society (Deutsche Gesellschaft für Gefäßchirurgie und Gefäßmedizin, DGG). The study focused in particular on a possible relationship between annual hospital caseload and outcome.

Between 1999 and 2010 a total of 36,594 surgical procedures for nrAAA and 4859 surgical procedures for rAAA were recorded in 201 hospitals. Categorical and quantitative characteristics are summarized in descriptive statistics. To analyze a relationship between annual hospital caseload and in-hospital mortality, the hospitals were divided into volume groups. A mixed logistic regression model was used to compare the groups. Additionally, a univariate model with volume groups as an influencing variable was adjusted to the data, as well as multivariate models with volume groups, type of surgery, age, AAA size, ASA score and presence of an additional iliac aneurysm or inflammatory AAA as independent variables.

The mean age was 71.0 years (± 8.1) in nrAAA and 73.8 years (± 9.1) in rAAA. In total, 66.7 % of patients with nrAAA and 88.3 % in rAAA presented with ASA ≥ 3. In nrAAA, 37 % of patients received endovascular aortic repair (EVAR), 11.8 % for rAAA. In-hospital mortality for nrAAA was 2.7 % [open aortic repair (OAR) 3.6 %, EVAR 1.3 %], for rAAA 39 % (OAR 41.2 %, EVAR 21.8 %).
Univariate analysis showed increasing age, ASA ≥ 3, increasing aneurysm size, inflammatory AAA and OAR to be significant predictors of higher in-hospital mortality in both nrAAA, and rAAA. A significant survival benefit for the treatment of nrAAA could be shown for patients treated in hospitals with a caseload of ≥ 31 operative procedures per year (compared to 1–20 operative procedures/year). Hospitals with higher annual caseloads also showed a trend towards decreased mortality in rAAA. Multivariate analysis showed increasing age, AAA diameter ≥ 6 cm, ASA ≥ 3 and OAR to be independent predictors of perioperative fatality in nrAAA and rAAA. In nrAAA, an annual AAA volume of 50–62 cases was an independent predictor of lower in-hospital mortality. 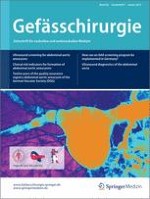 Incidence, risk factors, and outcome of retrograde type A aortic dissection after TEVAR

Ultrasound diagnostics of the abdominal aorta

How can an AAA screening program be implemented in Germany?