The aim of this study was to report the clinical features, management, and outcome of two cases of complete hydatidiform mole with a coexisting viable fetus and to review the literature.

In this article, we report on the well-documented follow-up of two cases of twin pregnancies with complete hydatidiform mole and a normal fetus. Genetic amniocentesis showed normal fetal karyotype in both of two cases. In the first case, a live male infant was delivered by a cesarean section because of severe maternal bleeding at 29 weeks of gestation. In the second case, termination of pregnancy was performed due to early onset of severe preeclampsia and vaginal hemorrhage.

The chances of a live birth have been estimated between 30 and 35% and the risk of persistent trophoblastic disease is similar to singleton molar pregnancies in complete mole with coexisting fetus pregnancy. Therefore, in these pregnancies, expectant management instead of termination of pregnancy can be suggested. 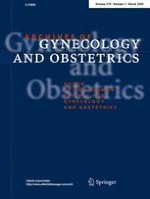 Dipyrone use during pregnancy and adverse perinatal events