A malunited distal radius fracture can lead to symptomatic ulnar impaction syndrome, which is a common cause for ulnar-sided wrist pain. If conservative treatment fails and symptoms persist after an arthroscopic ulnocarpal debridement, ulnar shortening osteotomy (USO) is the treatment of choice. Since the first USO described by Milch in 1941 after a malunited Colles fracture, many techniques have been described varying in surgical approach, type of osteotomy and osteosynthesis material used. Many studies demonstrated good to very good functional results after USO, reporting, however, a delayed union or non-union rate up to 18%. A modern, low profile, locking plate showed in our short-term study very good functional results and no implant-associated complications, in particular no non-union. 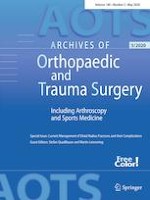 Current management of distal radius fractures and their complications