Estrogen deprivation with oral aromatase inhibitors (AI) is an established therapy in postmenopausal women with an estrogen (ER) and/or progesterone receptor (PR) positive breast cancer (BC) [ 1]. Although they improve survival, AIs worsen or induce vaginal atrophy, dryness, and dyspareunia in most women [ 2]. Some develop atrophic vaginitis, a subtype of aerobic vaginitis (AV) [ 3]. These side effects dramatically reduce the quality of life (QoL) and hamper compliance which affects patient survival [ 4]. As more women using AI therapy are surviving BC for many years, these side effects become a major challenge for both patients and their physicians [ 5, 6].
Vaginal estrogen application is the most effective therapy to alleviate these symptoms [ 4, 7, 8] and is clearly more efficacious than non-hormonal therapies [ 9– 11]. However, vaginal administration of any dose of estradiol (E2) in AI users increases serum levels of E21 [ 3– 14] [ 15– 18]. Therefore, most authors see such treatment as a potential danger in women with a history of BC women as systemic absorption of estrogen can stimulate the growth of breast cancer cells [ 5, 6, 19– 22]. Thus, since safety is a major issue, only less potent estrogens should be considered for vaginal treatment. E3, a less potent estrogen than E2, the vaginal application of 1 mg in postmenopausal women with vaginal atrophy did not increase serum levels at 2 weeks, 3 months, and 6 months as compared to controls, and endometrial biopsies showed no proliferation [ 23].
Anzeige
Gynoflor ® contains 10 [ 8] viable lyophilized Lactobacillus acidophilus ( L.  acidophilus KS400) bacteria and 0.03 mg E3, which is a 16–32 times lower dose than in conventional E3 vaginal preparations (0.5–1 mg). This product has been proven to be safe and efficacious in restoration of the disturbed vaginal flora [ 24, 25] and in treatment of postmenopausal atrophic vaginitis [ 26– 29]. Former data indicate that application of one tablet of Gynoflor ® daily in healthy postmenopausal women with vaginal atrophy doubles C max of E3 of compared with baseline level, but still within the postmenopausal range at day 1; whereas at day 12, C max compared with baselevel was not increased at all [ 30].
This phase I pharmacokinetic study primarily assessed circulating estrogens and efficacy after vaginal ultra-low-dose 0.03 mg estriol (E3) and L.  acidophilus combination vaginal tablets (Gynoflor ®) in BC patients on a NSAI.

From 19 screened women, 16 were included in this study, 8 from each center (Fig.  1). One protocol violation was noted: a woman was treated with the steroidal AI exemestane before switched to non-steroidal AI, but was recruited as the investigator was not aware of that. Minor protocol deviations included small shifts from PK measurements schedule, PK sample processing, and shifts in the visits schedule due to inability of patients to attend.
Anzeige
All 16 patients were Caucasian, with a mean age of 57.0 (range 52.0–63.0) years and a body mass index of 23.5 ± 3.0. Patients menstruated a mean of 75.0 (range 25.0–277.0) months ago. The diagnosis of BC had been a median of 2.6 years ago with a range from 2.0 to 28.2 years, and median duration of AI therapy was 2.1 years with a range of 0.5–7.7 years. The daily AI dose was either 1 mg letrozole or 2.5 mg anastrozole. Mean Karnofsky score was 98.1 ± 5.4 %. Mostly used concomitant medications were taken for gastrointestinal tract illnesses (56 %) and for improving the function of the musculoskeletal system, mainly antiphlogistics (44 %).
Treatment compliance was very good during both initial (range 98.7–100.0 %) and maintenance therapy (range 95.8–100.0 %).
Serum E2 and E1 concentrations did not increase at visit E and at visit C2 and were always below the LLOQ, except for one sample of one subject with a E2 concentration just above LLOQ (1.19 pg/ml). After the first application of test medication (visit E, day 0), 15 of 16 women had a transient increase in serum E3 concentration with a C max ranging from 67.6 to 168.0 pg/ml, occurring at 2–3 h post-insertion (Fig.  2). This increase was much lower (maximum 43.70 pg/ml) and occurred later (at 6–8 h) after 4 weeks (visit C2, day 28) and at this visit half of the subjects did not have at all any quantifiable concentrations of E3 (Table  1). The C max (Table  2 ) was significantly lower at visit C2 compared to visit E ( p < 0.0001).
Table 1
Average serum estriol (E3) concentrations at Visit E (day 0) and Visit C2 (day 28), (PPS, n = 16)
Lower limit of quantitation (LLOQ) considered as zero (E3 < 10.00 pg/ml)
SD Standard deviation
Table 2
Main pharmacokinetic (PK) parameters of E3 (PPS, n = 16)
aAUC (0–24),C2 parameter is not reliable due to late metabolism and insufficient testing points
n Number of patients, SD standard deviation, CV coefficient of variation, GeoMean geometric mean, GeoCV coefficient of variation of the geometric mean, PPS per-protocol-set, C max maximal concentration, t max time at which C max was reached, AUC (0–24) area under the curve from the administration to the last measured concentration, NA not applicable, LLOQ lower limit of quantitation, considered as zero ( E3 < 10.00 pg/ml)
×
E3 levels (Table  3; Fig.  3) were below the LLOQ for all, except two subjects. One had a E3 serum concentration of 22.3 pg/ml at C1, and one had E3 levels of 49.2 pg/ml and 14.5 pg/ml at C1 and C2, respectively. The trough concentrations for E2 and E1 were always below LLOQ.
Table 3
Secondary variables (PPS)
a n = 14, PPS per-protocol set, n number of patients, SD standard deviation, FSH follicle stimulating hormone, LH luteinising hormone, SHBG sex hormone-binding globulin, VMI vaginal maturation index, LBG lactobacillary grade, BV bacterial vaginosis, AV aerobic vaginitis, E entry visit, C control visits
×
Anzeige
There were no statistically significant changes of LH and SHBG serum concentrations during treatment. At visit C2, FSH showed a scant, but significant decrease of serum concentration compared to E ( p = 0.025), but no significant differences were observed at visits C1, C3, and C4.
VMI improved rapidly already after 2 weeks of treatment from 31 % at entry to 70 % at visit C1 ( p < 0.0001) and to 72 % at the end of initial therapy, and was maintained until the end of maintenance therapy at 73 % (Fig.  4, panel a).
×
Maximum E3 levels inversely correlated with VMI values at visit E and visit C2 ( R 2 = 0.62, Fig.  5), demonstrating that the maturing epithelium rapidly precludes further E3 absorption after the initial therapy.
×
Another important efficacy variable was LBG. At the study entry, the majority of subjects had grossly abnormal vaginal flora (LBG III, 81 %), the remainder being LBG IIb (moderately disturbed). After the 28 days of therapy, almost complete normalisation of the vaginal flora was observed (Fig.  4, panel b): it had become only slightly disturbed (LBGIIa, 63 %) or normal (LBGI, 25 %). Further significant improvements were observed during the maintenance therapy: at C4, the majority of women had a stable and normal vaginal flora (LBGI, 69 %; p = 0.039).
Vaginal pH showed statistically significant decrease (Fig.  4, panel c) from entry (mean 6.0) to visits C1, C2, and C4 (mean 4.4–4.6; p < 0.001), and remained unchanged thereafter during maintenance therapy.
Clinical symptoms of vaginal atrophy like dryness, soreness, and dyspareunia all improved during treatment. Dryness and soreness improved dramatically from entry to control visits ( p < 0.001), while statistical evaluation of the improvement in dyspareunia was hampered by low numbers. At entry, sexual intercourse was reported only by 19 % of women, whereas 31 % reported intercourse at visit C4 ( p > 0.05). The experience of vaginal discharge increased significantly from entry to C2 ( p < 0.01), and then decreased to the end of treatment. Vaginal paleness improved significantly from entry to C2 ( p = 0.039) and to C4 ( p = 0.006), whereas for redness, ulceration, and rugae, no significant improvement was observed (Table  3).
Almost no women had BV flora at any visit, except at visit C2, where 4 subjects (25 %) presented with partial BV flora ( p > 0.05). AV score substantially improved during treatment, from 81 % of patients had moderate to severe AV at entry, to only 37 % with light to moderate AV after initial therapy ( p < 0.001). After maintenance therapy, all except one women had returned to normal flora ( p < 0.001). The majority of subjects had no Candida colonization at either visit (75–88 %), but at visit C1, 7 women (44 %) were colonized and 4 of them remained colonized during further visits.
From the second week of treatment, the majority of investigators and patients assessed the efficacy as good or very good (>90 and >75 %, respectively) and the evaluations of efficacy by patient significantly increased during maintenance therapy to 94 % at the end of the study period ( p = 0.022, Table  3). Global tolerability of the treatment was assessed by both the investigator and patient as good or very good (81–100 %).
No serious AE was reported. All 40 AEs were of mild or moderate severity, of which 15 (62.5 %) were assessed as potentially related to the study medication. The most frequent of them was vaginal discharge.

This study and online free access of the publication was sponsored by Medinova AG, Switzerland.
Open AccessThis article is distributed under the terms of the Creative Commons Attribution Noncommercial License which permits any noncommercial use, distribution, and reproduction in any medium, provided the original author(s) and the source are credited. 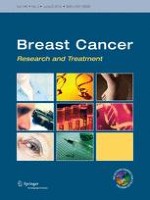 Androgenic pathways in the progression of triple-negative breast carcinoma: a comparison between aggressive and non-aggressive subtypes