The primary purpose of this study was to determine the accuracy of the standard deviation of normal-to-normal intervals (SDNN) to root mean square of successive normal-to-normal interval differences (RMSSD) ratio from 1-min recordings (SDNN:RMSSD1−min) compared to criterion recordings, as well as its relationship to low-frequency-to-high-frequency ratio (LF:HF) at rest and following maximal exercise in a group of collegiate athletes.

Twenty athletes participated in the study. Heart rate variability (HRV) data were measured for 5 min before and at 5–10 and 25–30 min following a maximal exercise test. From each 5-min segment, the frequency-domain measures of HF, LF, and LF:HF ratio were analyzed. Time-domain measures of SDNN, RMSSD, and SDNN:RMSSD ratio were also analyzed from each 5-min segment, as well as from randomly selected 1-min recordings.

The 1-min values of SDNN, RMSSD, and SDNN:RMSSD provided no significant differences and nearly perfect intra-class correlations (ICCs ranged from 0.97 to 1.00, p < 0.001 for all) to the criterion measures from 5-min recordings. In addition, SDNN, RMSSD, and SDNN:RMSSD from the 1-min segments provided very large to nearly perfect correlations (r values ranged from 0.71 to 0.97, p < 0.001 for all) to LF, HF, and LF:HF, respectively, at each time point.

The findings of the study suggest that ultra-shortened time-domain markers may be useful surrogates of the frequency-domain parameters for tracking changes in sympathovagal activity in athletes. 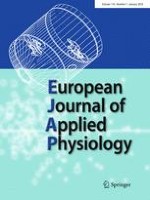