We aimed to study the validity of six published ultrasound criteria for risk stratification of thyroid nodules in the former severely iodine deficient population of Austria.

Retrospective, single centre, observer blinded study design. All patients with a history of thyroidectomy due to nodules seen in the centre between 2004 and 2014 with preoperative in-house sonography and documented postoperative histology were analyzed (n = 195). A board of five experienced thyroidologists evaluated the images of 45 papillary carcinomas, 8 follicular carcinomas, and 142 benign nodules regarding the following criteria: mild hypoechogenicity, marked hypoechogenicity, microlobulated or irregular margins, microcalcifications, taller than wide shape, missing thin halo.

All criteria but mild hypoechogenicity were significantly more frequent in thyroid cancer than in benign nodules. The number of positive criteria was significantly higher in cancer (2.79 ± 1.35) than in benign nodules (1.73 ± 1.18; p < 0.001). Thus, with a cut-off of two or more positive criteria, a sensitivity of 85% and a specificity of 45% were reached to predict malignancy in this sample of thyroid nodules. As expected, the findings were even more pronounced in papillary cancer only (2.98 ± 1.32 vs. 1.73 ± 1.18, p < 0.001). The six ultrasound criteria could not identify follicular cancer. 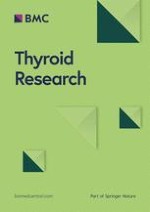 Management of hypothyroidism with combination thyroxine (T4) and triiodothyronine (T3) hormone replacement in clinical practice: a review of suggested guidance

Effect of perchlorate and thiocyanate exposure on thyroid function of pregnant women from South-West England: a cohort study

The largest reported papillary thyroid carcinoma arising in struma ovarii and metastasis to opposite ovary: case report and review of literature