Ultrasound elastography-based assessment of the elasticity of the supraspinatus muscle in impingement syndrome: does elastography has any diagnostic value? | springermedizin.de Skip to main content
TOOLBAR 1 2 3 4
SUCHE MENÜ 1 2 3 4

Ultrasound elastography (UE) is a new ultrasound-based imaging technique that provides information about elasticity and stiffness of tissues. This cross-sectional study aimed to identify the diagnostic importance of UE in supraspinatus impingement syndrome. Forty-one subjects, aged 38–70 years, were included in the study. UE was used to determine the elasticity of the supraspinatus muscle. The strain ratio was calculated as the evaluation criteria to measure the elasticity of the muscle. High strain ratio indicated low elasticity. The measurements were made by the blinded radiologist while the patients sat with their shoulder in a neutral position. The diagnostic value of the strain ratio was evaluated using the receiver operating characteristic (ROC) analysis. The mean strain value of the supraspinatus muscle on the intact and pathological shoulders determined by UE was 0.74 ± 0.33 and 0.31 ± 0.24, respectively. A low strain ratio value in the supraspinatus muscle on the side with impingement syndrome was measured. When the test variable was evaluated as “strain ratio” according to ROC curve analysis, it was found to be above the reference line [0.849 (> 0.5)] (P = 0.00). When the cutoff value was selected as 0.495, the sensitivity and specificity were found to be 75.6 and 78% (the strain ratio value > 0.495), respectively. Measurement of strain ratio with UE can be used as a noninvasive, inexpensive, and practical diagnostic test for the shoulder impingement disease. 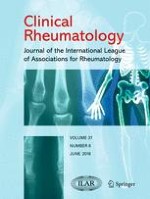