There was no difference in cumulative opioid consumption during the first 24 h postoperatively between the TAP (32.2 mg [95% CI, 27.6–36.7]) and control (35.6 mg [95% CI, 28.6–42.5]; P = 0.41) groups. Postoperative opioid consumptions during phase I recovery and the 24–48-h interval were similar between groups, as were pain scores at rest and with movement during all measured intervals. The rates of nausea or vomiting and pruritus were equivalent. 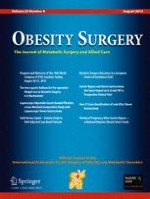 Bariatric Surgery Outcomes in a European Centre of Excellence (CoE)

The Intra-gastric Balloon for Pre-operative Weight Loss in Bariatric Surgery: Is it Worthwhile?