Ultrasound (US) is the standard of care for vascular access in many clinical scenarios. Limited data exist regarding the benefits of US- versus landmark (LM)-guided femoral vascular access in the pediatric catheterization laboratory. This study aimed to compare US- and LM-guided vascular access in the pediatric catheterization laboratory. A single operator randomized 95 patients (201 vessels) to undergo either LM- or US-guided vascular access. The primary end point was the access success rate. Number of attempts, inadvertent access, time to sheath placement, and complications also were compared between the two groups. No difference was seen in the overall access success rate: 98 % with US versus 93 % with LM (p = 0.17). The success rate for the targeted vessel was higher with US (89 %) than with LM (67 %) (p = 0.012). US facilitated fewer attempts (1.1 ± 0.4 vs 1.4 ± 0.9; p = 0.048) and improved the first-attempt success rate (87 vs 77 %; p = 0.049). The time to access did not differ significantly between the two groups (US 2:55 ± 4:03 vs LM 3:37 ± 2:54; p = 0.28). No differences in complication rates were noted. The benefits of US were accentuated in the subgroup weighing less than 10 kg. In this study, US access in the pediatric catheterization laboratory did not improve overall success. However, US improved accuracy and reduced the number attempts necessary for access without prolonging the access time of the procedure. Small children realized the greatest benefit of US-guided access. 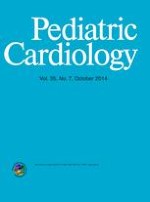 Novel and Highly Lethal NKX2.5 Missense Mutation in a Family With Sudden Death and Ventricular Arrhythmia