This study was conducted to identify and describe the patients’ perceptions of Islamic medicine based on gender, age, marital, educational level and working status among the Malaysian Muslim population. A nationwide interviewer-administered questionnaire survey was conducted in 2013. An open-ended questionnaire pertaining to Islamic medicine was used to increase the probability of capturing maximum data. This survey implemented a multistage design, stratified by state, proportionate to the size of the state population and was representative of the Malaysian population. Post-survey classification of results was performed accordingly. Complex data analysis was carried out using SPSS 16.0. The discussion was identified and categorised into various sections. The paper concludes that Islamic medicine has a major influence in the Malaysian Muslim community compared to other alternatives. Further, its potential for growth and importance especially for treating spiritual ailments cannot be denied. The respondents indicated that two factors motivate Islamic medicine in Malaysia: (1) the Muslim community opts for alternative healing because of their dissatisfaction with conventional methods; (2) Islamic medicine focuses only on healing spiritual-related problems. The average perception of respondents is that the function of Islamic medicine in healing physical diseases is undervalued and that it is not suitable to replace the functions of modern health institutions. 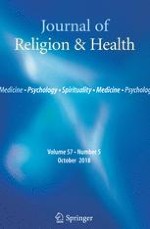 Neuroscience and Brain Death Controversies: The Elephant in the Room

Health and Religions: A Bibliometric Analysis of Health Literature Related to Abrahamic Religions Between 1975 and 2017