The parotid gland is the largest salivary gland in humans, and produces mainly serous secretions. The secretion of this gland reaches the oral cavity through single parotid duct (Stensen’s duct). The parotid duct begins at the anterior border of the gland, crosses the masseter, and then pierces the buccinator and open the mouth. The present study reports a rare variation of a unilateral double parotid duct that was observed in the right side of the face of a 75-year-old male cadaver during dissection. The embryological basis of this variation can be explained as follows. A sprout originates from epithelium lining the primitive oral cavity, grows dorsally, and bifurcates. The end parts of these branches invaginate into the adjacent mesenchyme separately, proliferate, and make the parotid gland, while their proximal parts later form communicating ducts (D1 and D2) connecting the gland to the mouth. Furthermore, the clinical importance of this variation was discussed. 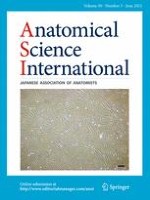 Dimensions and attachments of the ankle ligaments: evaluation for ligament reconstruction

Free manual of cadaver dissection modifiable by other anatomists