Expectant management is a mainstay of treatment of unscheduled bleeding that occurs as a result of hormonal contraceptive use. NSAIDs and COCs are commonly used for treatment. Small randomized controlled trials of other methods have demonstrated some effectiveness, although evidence is limited. 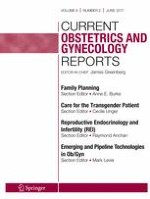 Hysterectomy for the Transgender Man