Patients with an acute illness frequently acquire an acute, global disturbance in cognition variably referred to as delirium, encephalopathy, acute confusional state, acute brain dysfunction, acute brain failure, and altered mental status [ 1]. Although these different terms may have been perceived as distinct clinical entities [ 2], evidence to support such distinctions is lacking.
Acute disturbances in cognition are particularly prevalent among individuals admitted to the intensive-care unit [ 3]. These disturbances have been linked to predisposing and triggering factors [ 4], and have been independently associated with adverse short- and long-term outcomes, including higher mortality and chronic cognitive impairment [ 5, 6]. While progress has been made in the detection of this problem, research is needed to identify effective interventions for prevention and treatment. A rational approach to nomenclature represents an important basis to enable such advances.
Anzeige
A definition of delirium is provided in the 5th version of the Diagnostic and Statistical Manual (DSM-5) of the American Psychiatric Association [ 7] and in the 11th edition of the International Statistical Classification of Diseases and Related Health Problems (ICD-11) [ 8]. Encephalopathy is a generic term that has been used to describe a global disturbance in brain function. However, the terms acute encephalopathy, acute confusional state, acute brain dysfunction, acute brain failure, and altered mental status lack uniform definitions and are not present in formal diagnostic systems. Our analysis focuses on delirium and acute encephalopathy, as these are the most frequently used terms.
We hypothesized that published research on delirium and encephalopathy is highly segregated, and that this segregation would be linked to the clinical discipline of investigators. We conducted a systematic search (see details in the Supplementary Materials) which led to three findings. First, journals on clinical neurology, neurosciences, or general or internal medicine published significantly more articles with ‘encephalopathy’ in the title, whereas journals associated with geriatrics, gerontology, psychiatry, psychology, intensive-care medicine, or anaesthesiology published significantly more delirium-titled articles ( P < 0.001). Second, articles with ‘encephalopathy’ in the title rarely (1%, n = 1 of 100 randomly selected articles) mentioned ‘delirium’ in the text, and conversely articles with ‘delirium’ in the title used the word ‘encephalopathy’ in not more than 2% of publications ( n = 2 out of 100). Third, almost all citations in the delirium and encephalopathy literature (98.77%, n = 36,729) were between papers with matching terms in the titles (i.e., delirium-titled articles citing other delirium-titled articles and encephalopathy-titled articles citing other encephalopathy-titled articles). Only a small proportion (0.53%, n = 197) of citations were from encephalopathy-titled articles citing delirium-titled papers, or from delirium-titled articles referencing papers with the term ‘encephalopathy’ in the title (0.70%; n = 259). It should, however, be noted that almost all articles on ‘acute encephalopathy’ use the term ‘encephalopathy’ in isolation; therefore, it is possible that segregation of the literature could be driven, in part, by the inclusion of articles on chronic encephalopathy.
These findings confirmed our hypothesis on the existence of segregated literatures, and suggest conceptual or semantic disparities across different medical disciplines. We believe that the lack of a uniform nomenclature represents a significant barrier to scientific progress and has implications for clinical management that might influence patient outcome. For example, use of the term ‘delirium’ may trigger specific management, whereas ‘septic encephalopathy’ may overlook mechanisms other than sepsis, such as metabolic alterations or drug side-effects. Additional factors, such as differences in billing and reimbursement between patients diagnosed with encephalopathy (versus delirium), may be a factor driving the selective use of terms in some countries, such as the USA.

To generate expert consensus, we convened an international, interdisciplinary panel of leading experts with expertise in intensive-care medicine, neurology, geriatrics, rehabilitation medicine, pharmacy, anaesthesiology, and psychiatry. Panellists were tasked with generating recommendations on the nomenclature of delirium, acute encephalopathy, and related terms. The definitions were created, refined, and voted on using the modified Delphi method (see Supplementary Materials).
Anzeige
The panel recommends the term acute encephalopathy to describe a rapidly developing (in less than 4 weeks) pathobiological brain process which is expressed clinically as either subsyndromal delirium, delirium or coma and may have additional features, such as seizures or extrapyramidal signs (Box). The term acute encephalopathy is not recommended as a descriptor of clinical features that can be observed at the bedside. Instead, the panel recommends the term subsyndromal delirium for acute cognitive changes that are compatible with delirium, but do not fulfil all DSM-5 delirium criteria, delirium for a clinical state defined according to the criteria of the DSM-5 [ 6], and coma for a state of severely depressed responsiveness defined using diagnostic systems such as the Glasgow Coma Score (GCS) or the Full Outline of UnResponsiveness (FOUR) score (Box) [ 9, 10]. The panel further recommends against use of the terms acute confusional state, acute brain dysfunction, acute brain failure, or altered mental status in clinical practice or research (Box). Although these terms might have relevance for educational purposes, the panel felt that they lacked face or construct validity.
The recommendations in this manuscript have been endorsed by ten key professional societies (see Supplementary Materials), and this terminology is congruent with the recent recommendations for the nomenclature of cognitive change associated with anaesthesia and surgery [ 11]. Delayed neurocognitive recovery after anaesthesia and surgery can be regarded as consequence of prolonged postoperative acute encephalopathy.
In conclusion, current literature on delirium and acute encephalopathy is highly segregated, presenting an obstacle for clinical care and research. We recommend a consensus-based, pragmatic nomenclature which we expect will establish a foundation for advances in the field. Following dissemination of these recommendations, future research should evaluate the impact of this revised nomenclature on clinical practice and research.

Box: Recommendations for the nomenclature of delirium, acute encephalopathy, and related terms

The American Academy of Neurology affirms the value of this statement as an educational tool for neurologists. The Neurocritical Care Society affirms the content of this document as educational.

Potential financial or non-financial interests: none.
Open AccessThis article is licensed under a Creative Commons Attribution-NonCommercial 4.0 International License, which permits any non-commercial use, sharing, adaptation, distribution and reproduction in any medium or format, as long as you give appropriate credit to the original author(s) and the source, provide a link to the Creative Commons licence, and indicate if changes were made. The images or other third party material in this article are included in the article's Creative Commons licence, unless indicated otherwise in a credit line to the material. If material is not included in the article's Creative Commons licence and your intended use is not permitted by statutory regulation or exceeds the permitted use, you will need to obtain permission directly from the copyright holder.To view a copy of this licence, visit http://​creativecommons.​org/​licenses/​by-nc/​4.​0/​. 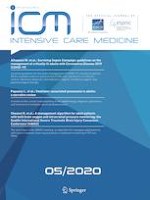 Intraosseous versus intravenous administration of adrenaline in patients with out-of-hospital cardiac arrest: a secondary analysis of the PARAMEDIC2 placebo-controlled trial

Tracheostomy: what is known and what remains to be determined