The ALI mouse models were established by cecal ligation and perforation, which were then treated with miR-125b-5p agomir or overexpressed TOP2A. Next, the pathological structure of ALI mouse lung tissues were observed, miR-125b-5p, TOP2A and vascular endothelial growth factor (VEGF) expression was determined, and the lung water content, inflammatory response, protein content in bronchoalveolar lavage fluid (BALF) and cell apoptosis in ALI mouse lung tissues were assessed. Exosomes were extracted from endothelial cells (ECs) and identified, which were then injected into the modeled mice to observe their roles in ALI. The targeting relationship between miR-125b-5p and TOP2A was confirmed.

Our study indicates that ECs-derived exosomes overexpressed miR-125b-5p to protect from sepsis-induced ALI by inhibiting TOP2A, which may contribute to ALI therapeutic strategies. 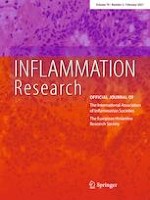 Potential roles of mitochondrial cofactors in the adjuvant mitigation of proinflammatory acute infections, as in the case of sepsis and COVID-19 pneumonia