The objective of this study is to explore changes in ghrelin plasma levels and ghrelin gastrointestinal gene expression (GHRL) after RYGB, and their relationships to T2Dr.

In 20 obese women with T2D, before and 3 months after RYGB, we assessed GHRL expression by microarray and quantitative RT-PCR in gastrointestinal biopsy samples and plasma levels of ghrelin.

After RYGB, GHRL expression increased in the excluded stomach (p < 0.05) with no change in other gastrointestinal sites. There were no significant changes in ghrelin plasma levels and no correlations with T2Dr.

After RYGB, over-expression of GHRL gene occurs only in the excluded stomach with no correlation to T2Dr. 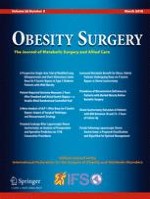 Endoscopic Septotomy for the Treatment of Sleeve Gastrectomy Fistula: Timing and Indications