We obtained data on all e-prescriptions written from April 2004 to March 2005. We tabulated the number of clinicians using the e-prescribing system and the number of prescriptions written. We also obtained claims data from the 2 insurance companies and calculated the proportion of each clinician’s prescriptions that were written electronically. We developed multivariable models to estimate the impact of different clinician characteristics on the proportional rate of e-prescribing.

During the first 12 months of the e-prescribing program, 1,217 prescribers began using the e-prescribing system. In the final month of the study, over 55,000 e-prescriptions were written for patients covered by the 2 included insurance plans. The proportion of total reimbursed claims per clinician written electronically increased slowly during the study period and was still below 30% by the end of the study period. This number increased to 42% when we restricted the sample to medications normally used for acute indications. Multivariable models showed that younger clinicians, pediatricians, and prescribers in larger practices exhibited higher uptake rates as a proportion of total prescriptions. 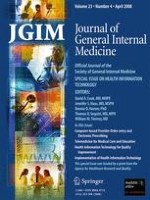 Introduction to the JGIM Special Issue on Health Information Technology

Use of an Interactive, Telephone-based Self-management Support Program to Identify Adverse Events Among Ambulatory Diabetes Patients

Centers Speak Up: The Clinical Context for Health Information Technology in the Ambulatory Care Setting