Chronic diseases have spread around the world. Cardiovascular diseases (CVD), the most important of the chronic diseases and the leading cause of death in women of Mashhad, are impacted by environmental factors. Urban green spaces (UGSs) are important environmental factors playing a critical role in the prevention and control of CVD. Spatial analysis is useful in understanding the application of UGSs in CVD prevention. To identify the spatial distribution of CVD in Mashhad, Moran’s index was used and 7539 home addresses of female patients with CVD were imported into ArcMap. Moran’s coefficient was estimated to be 0.34, revealing a clustered distribution of CVD. The spatial autocorrelation between CVD and UGSs was analyzed using Moran’s I. Moran’s I index value was calculated to be − 0.15, and four types of clusters were identified in eight sub-districts of Mashhad municipality. To find the factors influencing the presence in UGSs among women affected by CVD, 607 female patients living in the selected sub-districts were asked to take part in a telephone survey. Data were analyzed using ordinary least squares (OLS) and geographically weighted regression (GWR) at block level (343 statistical blocks in total). Accordingly, the spatial diversity and effects of three variables of income, level of education, and access to UGSs among female patients with CVD were measured. According to OLS results and the standard residual, two clusters were removed. Finally, vulnerable blocks were identified that could be helpful in the development of prevention policies and place-based interventions. 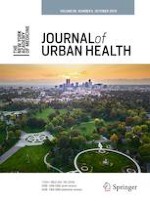 Correction to: Extending Data for Urban Health Decision-Making: a Menu of New and Potential Neighborhood-Level Health Determinants Datasets in LMICs

The Association between Neighborhood Environments and Physical Activity from Pregnancy to Postpartum: a Prospective Cohort Study

Structural Characteristics of Tree Cover and the Association with Cardiovascular and Respiratory Health in Tampa, FL