To analyse the administration of systemic glucocorticoids (SGC) to patients with Psoriatic arthritis (PsA). Online, anonymous, multiple-choice, closed-ended survey on SGC use in PsA, dose, duration of therapy, and the reason for administration. One hundred and twenty rheumatologists from Argentina (ARG) and 75 from other countries in Latin-America (LAT) completed the survey. Only 6% of the respondents indicated that they did not prescribe SGC, and 65% claimed that they administered them to less than 10% of their patients. Among those physicians who used SGC, 71% prescribed between 5 and 10 mg/day of prednisone, and only 5% over 10 mg/day. Seventy-three percent of the respondents administered SGC for less than 3 months, and 93% associated them with DMARDs, Biological Therapy (BT), or DMARDs plus BT. Clinical indications for SGC were (more than one option was possible): peripheral arthritis (79%), dactylitis (23%), enthesitis (20%), cutaneous involvement (11%), and axial involvement (8%). Thirty-four percent of ARG physicians versus 21% of LAT used SGC in over 10% of their patients (p 0.07) while 76.5% of ARG versus 59% of LAT administered doses higher than 5 mg/day of prednisone (p 0.01). SGC were indicated by most of the rheumatologists surveyed, but only to a reduced number of patients with PsA, at low doses, for short periods of time, associated with DMARDs/BT, and with the aim of treating peripheral joint manifestations. Argentinian physicians tended to prescribe SGC to more patients and at slightly higher doses. 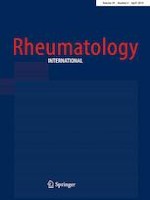 Disability due to rheumatic diseases in the city of Junín, Argentina

Early arthritis clinic is effective for rheumatoid and psoriatic arthritides

Fatty infiltration in the thigh muscles in knee osteoarthritis: a systematic review and meta-analysis

Accuracy, completeness and accessibility of online information on fibromyalgia