Use of the eight-Plate for angular correction of knee deformities due to idiopathic and pathologic physis: initiating treatment according to etiology | springermedizin.de Skip to main content
SUCHE MENÜ 1 2 3 4

Angular deformities of the knee resulting from idiopathic, congenital, or acquired causes are commonly encountered in pediatric orthopedics. Whereas physiological deformities should be treated expectantly, the remaining often progress enough to warrant operative treatment, despite attempted bracing. Historical methods of surgical treatment (e.g., epiphysiodesis and stapling) have yielded to the increasingly popular method of reversible guided growth using the eight-Plate.

We studied 58 patients with knee angular deformities managed with eight-Plate guided growth. All etiologies except physiological deformities and those with very slow growth rate were included. Each patient was under appropriate medical management during the entire duration of treatment and after plate removal.

In the dysplasia/syndrome group, we noted complete correction in 22 patients (78.5%), partial correction in 5 (17.9%), and no correction in 1 patient (3.6%). All cases of idiopathic deformities resolved. Patients with osteochondral dysplasias and genetic syndromes underwent earlier intervention and slower correction than those with idiopathic genu varum or valgum. The time difference in reaching a neutral mechanical axis between the two groups (11 months in idiopathic versus 18 months in pathological physis) could be explained by a significant difference in growth speeds (P = 0.003).

Results indicate that early intervention is advisable for patients with osteochondral dysplasias/syndromes as subsequent correction takes longer. If rebound growth causing recurrent deformity occurs, guided growth can be safely repeated. Additionally, complications reported with other techniques such as hardware failure, physeal violation by the implant, premature physeal closure, and overcorrection were not reported while using the eight-Plate.
Anzeige

Titel
Use of the eight-Plate for angular correction of knee deformities due to idiopathic and pathologic physis: initiating treatment according to etiology
verfasst von
Silvio Boero
Maria Beatrice Michelis
Simone Riganti 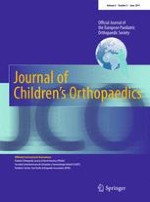 Proximal humerus fractures in the pediatric population: a systematic review