Early detection of patients with a high risk of postoperative pulmonary complications (PPCs) could improve postoperative strategies. We investigated the role of monitoring systemic and lung inflammatory biomarkers during surgery and the early postoperative period to detect patients at high risk of PPCs after lung resection surgery (LRS). This is a substudy of a randomized control trial on the inflammatory effects of anaesthetic drugs during LRS. We classified patients into two groups, depending on whether or not they developed PPCs. We constructed three multivariate logistic regression models to analyse the power of the biomarkers to predict PPCs. Model 1 only included the usual clinical variables; Model 2 included lung and systemic inflammatory biomarkers; and Model 3 combined Models 1 and 2. Comparisons between mathematical models were based on the area under the receiver operating characteristic curve (AUROC) and tests of integrated discrimination improvement (IDI). Statistical significance was set at p < 0.05. PPCs were detected in 37 (21.3%) patients during admission. The AUROC for Models 1, 2, and 3 was 0.79 (95% CI 0.71–0.87), 0.80 (95% CI 0.72–0.88), and 0.93 (95% CI 0.88–0.97), respectively. Comparison of the AUROC between Models 1 and 2 did not reveal statistically significant values (p = 0.79). However, Model 3 was superior to Model 1 (p < 0.001). Model 3 had had an IDI of 0.29 (p < 0.001) and a net reclassification index of 0.28 (p = 0.007). A mathematical model combining inflammation biomarkers with clinical variables predicts PPCs after LRS better than a model that includes only clinical data. Clinical registration number Clinical Trial Registration NCT 02168751; EudraCT 2011-002294-29. 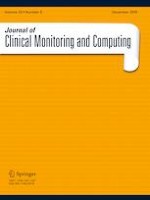