29 MRA examinations on 26 patients (mean age 39 years) demonstrated abnormal early venous drainage (n = 22) as well as diminutive/delayed cavernosal enhancement (n = 3), incomplete tumescence (n = 2), and combined arterial inflow/venous outflow disease (n = 1). The MRA had a concordance of 85.2% at determining the presence, or lack thereof of a shunt/AVM when compared to PDUS.

Time-resolved MRA allows for both temporal and spatial resolution with visualization of both arterial and venous abnormalities which may be suggested with a screening PDUS examination. This technique allows us to provide detailed anatomic information prior to any surgical intervention. 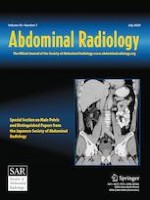 MRI findings of nonobstructive azoospermia: lesions in and out of pelvic cavity

MRI of the penis