Vaginal delivery in women with HIV in Italy: results of 5 years of implementation of the national SIGO-HIV protocol | springermedizin.de Skip to main content
TOOLBAR 1 2 3 4
SUCHE MENÜ 1 2 3 4

To evaluate the maternal and neonatal safety of vaginal delivery in women with HIV following the implementation of a national protocol in Italy.

Vaginal delivery was offered to all eligible women who presented antenatally at twelve participating clinical sites. Data collection and definition of outcomes followed the procedures of the National Program on Surveillance on Antiretroviral Treatment in Pregnancy. Pregnancy outcomes were compared according to the mode of delivery, classified as vaginal, elective cesarean (ECS) and non-elective cesarean section (NECS).

Among 580 women who delivered between January 2012 and September 2017, 142 (24.5%) had a vaginal delivery, 323 (55.7%) had an ECS and 115 (19.8%) had an NECS. The proportion of vaginal deliveries increased significantly over time, from 18.9% in 2012 to 35.3% in 2017 (p < 0.001). Women who delivered vaginally were younger, more commonly nulliparous, diagnosed with HIV during current pregnancy, and antiretroviral-naïve, but had a slightly longer duration of pregnancy, with significantly higher birthweight of newborns. NECS was associated with adverse pregnancy outcomes. The rate of HIV transmission was minimal (0.4%). There were no differences between vaginal and ECS about delivery complications, while NECS was more commonly associated with complications compared to ECS.

Vaginal delivery in HIV-infected women with suppressed viral load appears to be safe for mother and children. No cases of HIV transmission were observed. Despite an ongoing significant increase, the rate of vaginal delivery remains relatively low compared to other countries, and further progress is needed to promote this mode of delivery in clinical practice. 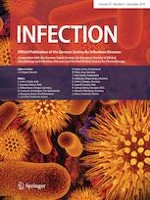 Report on an unusual case of leprosy from Germany: just an exception of the rule?