Cardiac output by ultrasound dilution showed low bias with wide limits of agreement when compared to measurement derived by the Fick equation. Although measurements through central and peripheral arterial lines were completed with minimal difficulties in the majority of patients, the application of COstatus® in neonates with low body surface area may be limited. 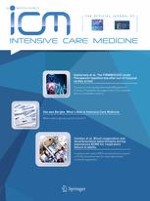 Gastrointestinal symptoms during the first week of intensive care are associated with poor outcome: a prospective multicentre study