This study was performed to validate a scoring system published in 2008 to predict the survival of patients receiving whole-brain radiotherapy (WBRT) alone for brain metastases.

The scoring system included four independent prognostic factors: age, performance status, extracranial metastases, and interval between first diagnosis of cancer and WBRT. The score for each prognostic factor was determined by dividing the 6-month survival rate (in %) by 10. The total score represented the sum of the scores for each prognostic factor. Total scores ranged from 9–18 points, and patients were divided into four groups. In the present study, 350 new patients were evaluated in order to validate the previously developed score.

In this study, the 6-month survival rates of the four prognostic groups were not significantly different from those of the preceding study. This demonstrates the validity and reproducibility of this score. The score can help select the appropriate treatment for the individual patient and help design prospective trials. 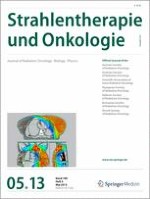 Radiotherapy for carcinoma of the vagina

Effect of a combined surgery, re-irradiation and hyperthermia therapy on local control rate in radio-induced angiosarcoma of the chest wall