Bruising is frequently documented in cases of violence for use as forensic evidence. However, bruises can be overlooked if they are not visible to the naked eye. Alternate light sources such as ultraviolet, narrow band, and infrared have been used in an attempt to reveal the presence of bruising that is not otherwise apparent. However, there is a significant gap in knowledge surrounding this technique as it has not been validated against histology to confirm that bruising is genuinely being enhanced. A recent study evaluated the ability of alternate light sources to enhance visibility of bruises using a pigskin model. However, histological confirmation of bruising in humans using these light sources has not yet been performed. In this study, embalmed and non-embalmed human cadavers were used. Bodies were surveyed with alternate light sources, and enhanced regions that were unapparent under white light were photographed with the alternate light sources and sampled for histological assessment. Immunohistochemical staining for the red blood cell surface protein glycophorin was used determine if the enhanced area was a bruise (defined by the presence of extravasated erythrocytes). Photographs of areas confirmed to be bruises were analyzed using the program Fiji to measure enhancement, which was defined as an increase in the measured transverse diameter. In the non-embalmed and the embalmed cadavers violet alternate light produced the greatest enhancement of histologically confirmed bruises, followed by blue (both p < 0.0001). Regions that were not confirmed as bruises also enhanced, indicating that light sources may not be specific. This suggests that the use of light sources to enhance the visibility of bruising should be undertaken with caution and further studies are required. 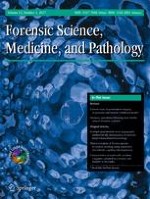