The promoters of the AKR1B1, ALX1, GHSR, GREM1, RASGRF2, SFRP2, TM6SF1 and TMEFF2 genes were found to be significantly differentially methylated in normal versus malignant breast tissues. Based on sensitivity, specificity and logistic regression analyses the best performing genes for detecting breast cancer were identified. Through multivariate analyses, we found that AKR1B1 and TM6SF1 could detect breast cancer with an area under the curve (AUC) of 0.986 in a receiver operating characteristic (ROC) assessment.

Based on our data, we conclude that AKR1B1 and TM6SF1 may serve as candidate methylation biomarkers for early breast cancer detection. Further studies are underway to evaluate the methylation status of these genes in body fluids, including nipple aspirates and blood. 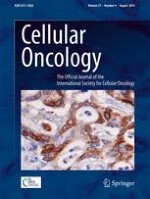