The introduction of neonatal hearing screening and the increasingly early age at which children can receive a cochlear implant has intensified the need for a validated questionnaire to assess the speech production of children aged 0‒18. Such a questionnaire has been created, the LittlEARS® Early Speech Production Questionnaire (LEESPQ). This study aimed to validate a second, revised edition of the LEESPQ.

Questionnaires were returned for 362 children with normal hearing. Completed questionnaires were analysed to determine if the LEESPQ is reliable, prognostically accurate, internally consistent, and if gender or multilingualism affects total scores.

Total scores correlated positively with age. The LEESPQ is reliable, accurate, and consistent, and independent of gender or lingual status. A norm curve was created.

This second version of the LEESPQ is a valid tool to assess the speech production development of children with normal hearing, aged 0‒18, regardless of their gender. As such, the LEESPQ may be a useful tool to monitor the development of paediatric hearing device users.

The second version of the LEESPQ is a valid instrument for assessing early speech production of children aged 0‒18 months. 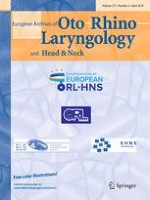 Oropharyngeal and tongue exercises (myofunctional therapy) for snoring: a systematic review and meta-analysis

Tumors of the parapharyngeal space: the VU University Medical Center experience over a 20-year period