The MT at the midpoint of the thigh anterior and QFMV were determined using ultrasonography and magnetic resonance imaging in 30 men and 30 women aged 51 to 77 years. First, we examined the validity of the MT-based prediction equation previously developed for young men to estimate the QFMV of middle-aged and older individuals. Second, we allocated the subjects to validation or cross-validation group and developed a prediction equation for estimating the QFMV using a stepwise multiple regression analysis. 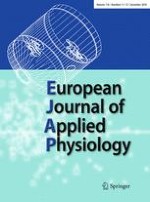 Duration of fascicle shortening is affected by muscle architecture and sex