The online version of this article (doi:10.​1007/​s00134-012-2616-y) contains supplementary material, which is available to authorized users.
On behalf of the CAVA II Study Group. The members of the CAVA II Study Group are given in the Appendix.
In memory of Prof. José Pontón, who described the CAGTA technique.
Presented in part at the 24th Annual Congress of the European Society of Intensive Care Medicine, Berlin, Germany, 1–5 October 2011.

Prospective study of 176 non-neutropenic patients, with SAC at ICU admission, and expected to stay at least 7 days. Surveillance cultures and BDG, CAGTA, CRP, and PCT levels were performed on the third day of ICU stay and twice a week for four consecutive weeks. Patients were grouped into invasive candidiasis (IC), Candida colonization, and neither colonized/nor infected. The classification and regression tree (CART) analysis was used to predict IC in colonized patients. The discriminatory ability of the obtained prediction rule was assessed by the area under the ROC curve (AUC).

BDG with a positive test for CAGTA accurately differentiated Candida colonization from IC in patients with SAC, whereas CRP and PCT did not. 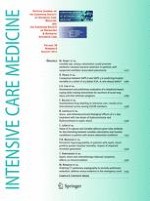 Comparison between SAPS II and SAPS 3 in predicting hospital mortality in a cohort of 103 Italian ICUs. Is new always better?

Point of care ultrasound for sepsis management in resource-limited settings: response to Via et al.