Nasu-Hakola disease (NHD) is a form of presenile dementia associated with sclerosing leukoencephalopathy and polycystic lipomembranous osteodysplasia. This extremely rare inherited disease is caused by mutations in either DAP12 or TREM2. The present study was designed to assess the relationship between DAP12/TREM2 genotype, mRNA and protein expression levels by both Western blotting and immunohistochemistry, and the tissue distribution and pathomorphological phenotype of the microglia. Molecular genetic testing performed in three NHD cases confirmed that two cases had mutations in DAP12 and that one case carried a mutation in TREM2. Protein levels were analyzed in four cases. Interestingly, significant DAP12 expression was found in numerous microglia in one NHD case with a homozygous DAP12 single-base substitution, and both real-time PCR and Western blotting confirmed the finding. In contrast, levels of both DAP12 and TREM2, respectively, were much lower in the other cases. Immunohistochemistry using established microglial markers revealed consistently mild activation of microglia in the cerebral white matter although there was no or only little expression of DAP12 in three of the NHD cases. The highly different expression of DAP12 represents the first description of such variable expressivity in NHD microglia. It raises important questions regarding the mechanisms underlying dementia and white matter damage in NHD. 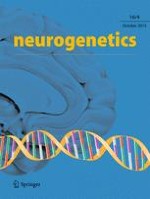 Mutations in ARID2 are associated with intellectual disabilities

Deletion of Inpp5a causes ataxia and cerebellar degeneration in mice