Arthroscopic partial meniscectomy of medial meniscus tears and varus alignment are considered independent risk factors for increased medial compartment load, thus contributing to the development of medial osteoarthritis. The purpose of this biomechanical study was to investigate the effect of lower limb alignment on contact pressure and contact area in the knee joint following sequential medial meniscus resection. It was hypothesized that a meniscal resection of 50% would lead to a significant overload of the medial compartment in varus alignment. 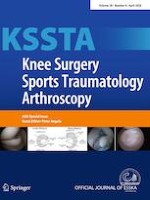 Clinical and radiographic predictors of failed hip arthroscopy in the management of dysplasia: a systematic review and proposal for classification