Vascular changes in individuals with type 2 diabetes mellitus majorly contribute to the development of cardiovascular disease. Increased cardiorespiratory fitness (CRF) has been associated with improvements in vascular health. Although CRF tends to improve with exercise training, there remains a portion of participants with little or no improvement. Given the importance of vascular function in individuals with type 2 diabetes, we assessed whether individuals who failed to improve CRF following a 1 year exercise intervention also failed to improve arterial stiffness and structural indices.

Individuals with type 2 diabetes with no major micro- and macrovascular complications and aged between 30 and 75 years old (n = 63) participated in a three-arm, 1 year, randomised controlled exercise intervention in Lisbon, Portugal. The study involved a non-exercise control group, a moderate continuous training combined with resistance training (RT) group and a high-intensity interval training with RT group. Allocation of participants into the intervention and control groups was done using a computer-generated list of random numbers. An improvement in CRF was defined as a change in \( \dot{V}{\mathrm{O}}_{2\mathrm{peak}} \) ≥5%. Vascular stiffness and structural indices were measured using ultrasound imaging and applanation tonometry. Generalised estimating equations were used to compare changes in vascular measures across individuals in the control group (n = 22) and those in the exercise groups who either had improved CRF (CRF responders; n = 14) or whose CRF did not improve (CRF non-responders; n = 27) following 1 year of exercise training.

This work was supported by fellowships from the Portuguese Foundation for Science and Technology. This work is also financed by a national grant through the Fundação para a Ciência e Tecnologia (FCT), within the unit I&D 472. 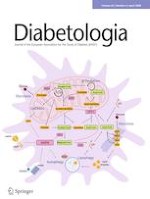 An exploratory, randomised, placebo-controlled, 14 day trial of the soluble guanylate cyclase stimulator praliciguat in participants with type 2 diabetes and hypertension

The changing face of paediatric diabetes